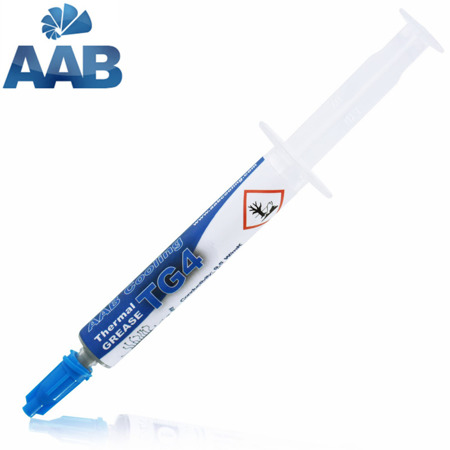 AABCOOLING Thermal Grease 4 - 3,5g is an extremely efficient thermal-conductive paste with a conductivity of as much as 9.5 W / mK. The modern formula was developed using Carbon-Nano technology, which incorporates a unique composition of metal oxide compounds that is six times better conductive than copper. Combined with CNT technology (carbon nanostructures several times stronger than steel), the modern TG 4 compound has been designed to provide the most stable performance of innovative Intel, AMD, nVidia and other electronic circuits. The ultra-modern formula TG 4 does not conduct electricity, so there is not even the slightest risk of electrical fault. Ideally fills the connections and the micro gap between the processor and the base of the cooling system (heatsink). High quality ensures stable operation without compromising thermal performance. The paste should be distributed very thinly for the best conductivity.